Create an alert for The VLDB Journal now and receive an email for each new issue with an overview and direct links to all articles. 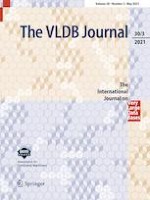 Semantic embedding for regions of interest