Results of theoretical and experimental studies of the magnetic characteristics of the electromagnetic system of a prototype of the Kibble balance are presented. Based on the prototype, the technical solutions that can be used to create a primary standard of a kilogram from fundamental physical constants are examined. The finite element method for calculating the geometrical shapes and sizes of the components of the system is used, for the purpose of deriving the constant value of the conversion coefficient of BL along the system axis. The electromagnetic system is designed and manufactured from the results of the calculations. The equipment, designed for measurement of the topology of the magnetic field in the gap of the magnetic system, was developed based on the National Primary Standard of units of power of magnetic losses and the magnetic flux density of a permanent magnetic field over the range from 0.1 to 2.5 T and magnetic flux over the range from 1·10–5 to 3·10–2 Wb, GET 198-2017. Experimental studies of the distribution of magnetic flux density in the gap of an electromagnetic system and outside of this system were conducted. The power characteristics of the electromagnetic system were determined. The effect of an electric current flowing past, on a coil in weighting mode, on the change of magnetic linkage of the coil is recorded. The condition of a coil in weighting mode in which the conversion coefficient of the magnetic system does not depend on the electric current intensity in the coil was determined.
Advertisement
previous article Determination of Probabilistic Characteristics of Random Values of Estimates of the Lyapunov Function for Description of a Physical Process
next article Measurement of the Intensity of a High-Frequency Electric Field: Application of a Ring Waveguide with Two Slots Filled with Electro-Optic Polymer 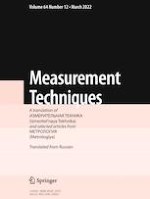 Calibration Laboratories: Risk Management and the Problem of Assessing Opportunities