A simple two-step process was developed to render the low-friction copper surface with longer durability. The copper substrate was firstly etched by immersing it in H2O2/HCl solution to fabricate a CuCl film, while a layer of stearic acid was then deposited on the CuCl film. Scanning electron microscopy, X-ray photoelectron spectroscopy, Fourier transform infrared microscopy and water contact angle measurements were used to analyze the morphological features, the chemical composition and hydrophobicity of freshly prepared specimens, respectively. Moreover, the friction-reducing behavior of the dual-modified copper surface sliding against a steel ball under unlubricating condition was evaluated in tribotester with a ball-on-plate configuration. It is found that the tribological performances of copper substrate are much improved by depositing stearic acid films on the etched copper. 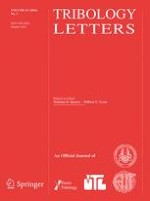 On the Contact Area of Nominally Flat Hertzian Contacts