» View abstract Download PDF-version
Important notes
Harold Garfinkel (1917–2011)
Clemens Eisenmann and Michael Lynch are the editors of this article. See also the Editors’ “Introduction to Harold Garfinkel’s Ethnomethodological ‘Misreading’ of Aron Gurwitsch on the Phenomenal Field” in this issue.

Clemens Eisenmann and Michael Lynch are grateful to Jason Turowetz for locating the seminars and their digital sound files, and to Anne W. Rawls, Garfinkel’s literary executor, for permission to publish the edited transcript of the seminar as well as for their insights on the topic. We also like to thank the Editors’ of Human Studies for their careful work with the text. Harold Garfkinkel is the author of the edited transcript of the seminar. Clemens Eisenmann and Michael Lynch are the editors of this article. 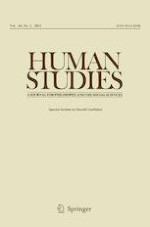 The Explorative Nature of Heideggerian Logic

The Declaration of Interdependence! Feminism, Grounding and Enactivism

A Dramatic Approach to the Self-Concept: Intelligibility and the Second Person

Working the Self: Truth-Telling in the Practice of Alcoholics Anonymous