This manuscript deals with the experimental and analytical studies carried out to explore the possibility of using naturally available bamboo to increase the bearing capacity of the soft soil. In order to extract the additional confinement effect on the soil, 3 dimensional-cells are formed from the locally available bamboo known as bamboo cells. The performances of the bamboo cells are compared with the commercial geocells. Further, a planar reinforcement in the form of bamboo grid was provided at the base of bamboo cells and the performance was compared with the clay bed reinforced with the combination of geocell and geogrid. The results of the laboratory plate load tests suggested that the ultimate bearing capacity of the clay bed reinforced with combination of bamboo cell and bamboo grid was about 1.3 times higher than the geocell and geogrid reinforced clay beds. In addition, a substantial reduction in the settlement was also observed. An analytical model was also proposed to estimate the bearing capacity of the clay bed reinforced with bamboo cells and bamboo grids. The model comprised of three mechanisms, namely the lateral resistance effect, vertical stress dispersion effect and membrane effect. The results predicted from the analytical model were found to be in good agreement with the experimental results. In a larger perspective, this study proposes a cost effective ground improvement technique in soft soils as an alternative to geocells and geogrids. 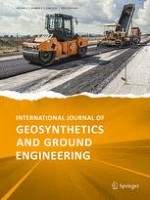