The main objective of this paper is to study the structural behaviour of hybrid fibre-reinforced concrete beams strengthened with glass fibre-reinforced polymer (GFRP) laminates. For the above purpose, three distinct groups of beam elements were cast, namely: (1) group A consisting of reinforced concrete (RC) and laminated RC beams, (2) group B consisting of fibre-reinforced concrete (FRC) and laminated FRC beams and (3) group C consisting of hybrid fibre-reinforced concrete (HFRC) and laminated HFRC beams. In beams of group B, basalt fibres were incorporated with a total volume fraction of 1%, whereas in group C beams, polyolefin and basalt fibres in the ratio of 30:70 were used with the total volume fraction of 1%. For lamination, 5-mm-thick GFRP sheet was used at the soffit of the all laminated beams. All the beams were tested under the four-point bending, until failure. The study parameters included evaluation of initial crack load, yield load and ultimate load and their corresponding deflections, ductility and failure modes. From the results, it was observed that the laminated HFRC beams exhibited higher load carrying capacity and larger deformation than the other beams. The ultimate load of laminated RC beam was about 33.44% higher than that of the control beams. The ultimate load of laminated HFRC improved by about 83.04% and 37.16% than the control and laminated RC beam, respectively. The load at FRP debonding initiation for ‘laminated HFRC beam’ is 43.06% higher than the laminated RC beam and 10.34% higher than the ‘laminated FRC beam’. Moreover, a 3-D finite element (FE) technique was adopted to simulate the performance of the beam elements. A fairly similar agreement was reached between the findings of the experimental and FE model results. 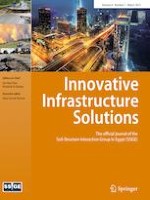 Role of red mud as a cementing material in concrete: a comprehensive study on durability behavior