This experimental study proposes a Split Shear Plates model to investigate the effects of a filled joint on S-wave attenuation. A dynamic impact is used to create frictional slip and generate an incident S-wave. The filled joint is simulated using a sand layer between two rock plates. Normal stress is applied to the filled joint, and semiconductor strain gauges are arranged on the two plates to measure the strain. Verification tests are conducted to validate the reliability of the experimental results. A series of tests is performed to investigate the influence of the normal stress, filled thickness and particle size of the filling materials on the S-wave propagation. The transmission coefficients of the filled joints are smaller than those of the non-filled joints because of the attenuation associated with the filling materials. Additionally, the transmission coefficients exhibit a stronger correlation with the normal stress than with the filled thickness or particle size. The transmission coefficients increase at a decreasing rate as normal pressure increases. 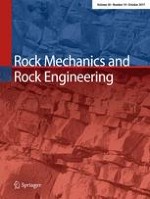 Characterization of Aseismic Fault-Slip in a Deep Hard Rock Mine Through Numerical Modelling: Case Study

Determination of Representative Volume Element Considering the Probability that a Sample Can Represent the Investigated Rock Mass at Baihetan Dam Site, China

Distinction of Crack Nature in Brittle Rock-Like Materials: A Numerical Study Based on Moment Tensors