The widespread use of subway system provides convenience for the fast transportation in the cities, but the subway fire accident has the risk of causing serious consequence. Therefore, it is important and helpful to do research on the characteristics of fire plume in subway carriage to recognize and control subway fires. The experiments were carried out in a 1/5th scale model subway carriage to investigate the fire plume characteristics. Two series of experiments with different door statuses (open and closed) were considered. Each series includes two fire source locations, one in the center of the carriage and one facing the door. Experimental results show that both the fire location and door status have little impact on the fire development in the current experiment. Similar to the study of Megret and Vauquelin (Fire Saf J 34(4):393–401, 2000), the average mass loss rate per unit area \(\dot{m}^{\prime\prime}\) is related to the equivalent diameter D, but the slope of the fitted line obtained from the experimental data is approximately 5.6 times that of the model of Megret and Vauquelin. The measured radiant heat flux away from the fire source (0.5 m longitudinal distance) is generally less than half of that near the fire source. The maximum temperature values in this experimental condition are higher than the literature data obtained from the common tunnel scenario, especially for the low heat release rates. Besides, an empirical correlation for predicting the maximum smoke temperature rise in the subway carriage was proposed and compared with other models. The predicted values of obtained correlation are higher than those of other models in the intermittent flame zone, while almost equal in the continuous flame zone. This related research outcomes can provide a reference for further understanding of the subway carriage fire. 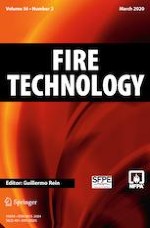