An unexpected behavior of grease in rolling contact has become known among tribologists that it forms thick film at low speeds, but the nature of the film has still been in dispute. The dominance of EHL effects has been demonstrated in the previous works, in which the increase in the generalized viscosity of grease has been reasoned to cause the increase in the film thickness. This paper describes experiments to measure the film thickness with optical interferometry, to observe the flow in and around the contact with microscopy, and to determine the change in the concentration of the thickener by IR spectroscopy. On the basis of these findings, the physics of the thick film formation with grease at low speeds is discussed. 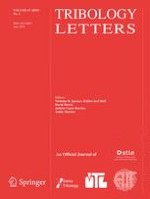 Relaxation Tribometry: A Generic Method to Identify the Nature of Contact Forces