Create an alert for SICS Software-Intensive Cyber-Physical Systems now and receive an email for each new issue with an overview and direct links to all articles.

Detecting the occupancy in households is becoming increasingly important for enabling context-aware applications in smart homes. For example, smart heating systems, which aim at optimising the heating energy, often use the occupancy to determine when to heat the home. The occupancy schedule of a household can be inferred from the electricity consumption, as its changes indicate the presence or absence of inhabitants. As smart meters become more widespread, the real-time electricity consumption of households is often available in digital form. For such data, supervised classifiers are typically employed as occupancy detection mechanisms. However, these have to be trained on data labelled with the occupancy ground truth. Labelling occupancy data requires a high effort, sometimes it even may be impossible, making it difficult to apply these methods in real-world settings. Alternatively, one could use unsupervised classifiers, which do not require any labelled data for training. In this work, we introduce and explain several unsupervised occupancy detection algorithms. We evaluate these algorithms by applying them to three publicly available datasets with ground truth occupancy data, and compare them to one existing unsupervised classifier and several supervised classifiers. Two unsupervised algorithms perform the best and we find that the unsupervised classifiers outperform the supervised ones we compared to. Interestingly, we achieve a similar classification performance on coarse-grained aggregated datasets and their fine-grained counterparts.
Advertisement
previous article A comprehensive modelling framework for demand side flexibility in smart grids
next article Using locally produced photovoltaic energy to charge electric vehicles 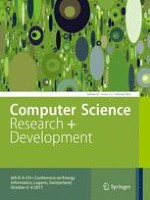 Smart grid co-simulation with MOSAIK and HLA: a comparison study

Including a virtual battery storage into thermal unit commitment