Fabrication of anodic photocurrent generation systems by use of 6-O-dihydrophytylcellulose as a matrix or a scaffold of porphyrins | springerprofessional.de Skip to main content
TOOLBAR 1 2 3 4
SEARCH MENU 1 2 3 4

» Get access to the full-text
Important notes
This paper was the subject of the Best Poster Award of the 235th edition of the ACS National Meeting, Cellulose and Renewable Materials.

Langmuir-Blodgett (LB) films containing porphyrin molecules were fabricated by use of 6-O-dihydrophytylcellulose (DHPC) toward anodic photocurrent generation systems. To suppress the porphyrin aggregation, two different approaches were applied: (1) mixing a low-molecular-weight porphyrin having a diterpenoid carbon skeleton (DPor) with DHPC as a matrix (matrix fabrication) and (2) bonding porphyrin molecules to the hydroxyl groups of DHPC covalently, converting into 6-O-dihydrophytyl-2,3-di-O-[p-(10,15,20-triphenyl-5-porphyrinyl)-benzoyl]cellulose as a scaffold (scaffold fabrication). The structure and film properties of the monolayers and the LB films were investigated by the surface pressure (π)–area (A) isotherm measurements, atomic force microscopy, UV–Vis spectroscopy, and absorption dichroism measurements. The porphyrin aggregation in the LB film could be well suppressed only by the scaffold fabrication, leading to the improvement of the photocurrent quantum yields. The efficient photocurrent performance can be demonstrated by the isolation and the parallel orientation of porphyrin moieties due to the cellulose rigid scaffold.

Title
Fabrication of anodic photocurrent generation systems by use of 6-O-dihydrophytylcellulose as a matrix or a scaffold of porphyrins
Authors:
Keita Sakakibara
Fumiaki Nakatsubo 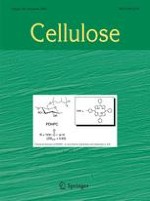 New approach to unravel the structure–property relationship of methylcellulose