Conservation efforts, including authorities outlined in the U.S. Endangered Species Act (ESA) of 1973, are attempting to slow the decline of species. Opinions on the success of the ESA vary widely, due in part to few species historically recovering to the point of delisting. Uncertainty surrounding the ESA relates to listing decisions and ambiguity of terminology within the ESA itself. Our goal was to evaluate the relationship, if any, of species characteristics, population metrics, threat level, and potential non-biological indicators to listing decisions under the ESA by the U.S. Fish and Wildlife Service (Service). We collected data from 143 ESA listing decisions published in the Federal Register from February 2011 to October 2014. Only 33 and 31% of listing decisions included population or range size estimates, respectively. Factors significantly correlated with ESA listing decision included taxonomic group, primary ownership of the species’ habitat (federal or non-federal), whether the species is aquatic or terrestrial, and whether the species was part of a single or multiple-species listing decision. Increasing number of listed threats and time as a candidate species correlated positively with being listed as endangered. We have attempted to broadly identify the role both intrinsic (biological) and extrinsic (non-biological) factors play in listing decisions, and the importance of comprehensive data to understanding species distribution and abundance to facilitate more informed listing decisions. 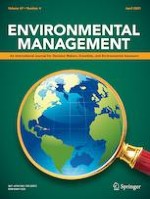 The Downstream Impacts of Hydropower Dams and Indigenous and Local Knowledge: Examples from the Peace–Athabasca, Mekong, and Amazon

Index-based Groundwater Sustainability Assessment in the Socio-Economic Context: a Case Study in the Western Iran