This work proposes two fault-tolerant quantum blind signature protocols based on the entanglement swapping of logical Bell states, which are robust against two kinds of collective noises: the collective-dephasing noise and the collective-rotation noise, respectively. Both of the quantum blind signature protocols are constructed from four-qubit decoherence-free (DF) states, i.e., logical Bell qubits. The initial message is encoded on the logical Bell qubits with logical unitary operations, which will not destroy the anti-noise trait of the logical Bell qubits. Based on the fundamental property of quantum entanglement swapping, the receiver simply performs two Bell-state measurements (rather than four-qubit joint measurements) on the logical Bell qubits to verify the signature, which makes the protocols more convenient in a practical application. Different from the existing quantum signature protocols, our protocols can offer the high fidelity of quantum communication with the employment of logical qubits. Moreover, we hereinafter prove the security of the protocols against some individual eavesdropping attacks, and we show that our protocols have the characteristics of unforgeability, undeniability and blindness. 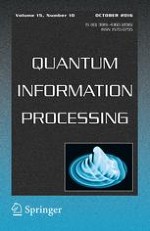 The negativity of Wigner function as a measure of quantum correlations