Electromagnetic induction surveys are among the most popular techniques for non-destructive investigation of soil properties, in order to detect the presence of both ground inhomogeneities and particular substances. This paper introduces a MATLAB package, called FDEMtools, for the inversion of frequency domain electromagnetic data collected by a ground conductivity meter, which includes a graphical user interface to interactively modify the parameters of the computation and visualize the results. Based on a non-linear forward model used to describe the interaction between an electromagnetic field and the soil, the software reconstructs the distribution of either the electrical conductivity or the magnetic permeability with respect to depth, by a regularized damped Gauss–Newton method. The regularization part of the algorithm is based on a low-rank approximation of the Jacobian of the non-linear model. The package allows the user to experiment with synthetic and experimental data sets, and different regularization strategies, in order to compare them and draw conclusions. 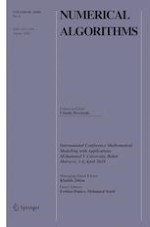 Some unusual results on extrapolation methods