The buckling behavior of functionally graded rectangular plates under mechanical and thermal loading is investigated using a four-node finite element based on a simple high-order shear deformation theory. Unlike other high-order shear deformation theories which employ a great number of unknown, the present element has only five degrees of freedom per node. The principle of total potential energy is used to derive the stiffness and geometrical matrices. Moreover, the assumed natural shear strain technique is introduced to elevate any shear locking phenomenon. The proposed model accounts for the quadratic variation of the transverse shear strains across the thickness and satisfies the zero traction boundary conditions on the top and bottom surfaces of the plate. Therefore, no shear correction factors are needed. Convergence and comparison studies showed the stability and accuracy of the present finite element in predicting the critical buckling load and the critical temperature rise of isotropic and functionally graded material plates. The effect of volume fraction exponent, side-to-thickness ratios, and loading types on the buckling behavior of functionally graded plates are also studied. 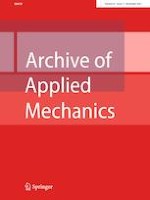