» Get access to the full-text
Important notes
The original online version of this article was revised: The authors first and last names have now been corrected.
A correction to this article is available online at https://​doi.​org/​10.​1007/​s00267-021-01520-8.
Publisher’s note Springer Nature remains neutral with regard to jurisdictional claims in published maps and institutional affiliations. 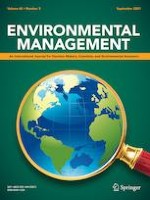 Correction to: Fire Management in The Boreal Forest of Swedish Sápmi: Prescribed Burning and Consideration of Sami Reindeer Herding During 1920–1970