The thick hard rock (THR) roof of the long-wall mining face is prone to the large-sized cantilever roof, and its sudden fracture will cause serious rock dynamic disasters, such as coal and gas outburst and rockburst. In this study, based on the long beam theory, the initial fracture mechanical model for THR was established, and the first weighting characteristics and extreme fracture step distance were calculated. This study introduced a new technology called deep-hole pre-splitting blasting (DPB) which could break the THR by drilling holes with different depths and angles at different levels of roof rock and then blasting it. Field measurement analysis indicated that the immediate roof and lower thick hard strata were fully collapsed to fill the goaf, and the upper thick hard stratum was effectively cut off. The results showed that mechanical model and drilling holes method and DPB technique were so notably that would lead to a foundation for large-scale popularization and application in a Chinese Mine. 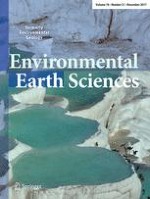 DFT study of the carbonation on mineral aerosol surface models of olivine: effect of water