From Buzz to Burst—Critical Remarks on the Term ‘Life’ and Its Ethical Implications in Synthetic Biology | springerprofessional.de Skip to main content
TOOLBAR 1 2 3 4
SEARCH MENU 1 2 3 4

In this paper, we examine the use of the term ‘life’ in the debates within and about synthetic biology. We review different positions within these debates, focusing on the historical background, the constructive epistemology of laboratory research and the pros and cons of metaphorical speech. We argue that ‘life’ is used as buzzword, as folk concept, and as theoretical concept in inhomogeneous ways. Extending beyond the review of the significant literature, we also argue that ‘life’ can be understood as a Burstword in two concrete senses. Firstly, terms such as life easily turn into fuzzy, foggy and buzzy clouds of nonsense, if their use is not appropriately reflected. In these cases, the semantic orientation is detonated. This is the Burstword I characteristic of the concept of ‘life’ that we reveal for its unclear terminological use. Secondly, and in contrast to Burstword I, we show that the concept of ‘life’ can be used in a methodologically controlled way. We call this kind of use Burstword II. Here the concept of ‘life’ fulfils the function of expanding an inadequately narrow disciplinary or conceptual focus in different discursive contexts. In this second sense, ‘life’ receives an important operational function, for instance as a transdisciplinary research principle. It turns out that the innovative function and paradigm-changing power of metaphorical speech belong here as well. Finally, we illustrate three ethically relevant examples that show how ‘life’ can be applied as Burstword II in the context of synthetic biology. 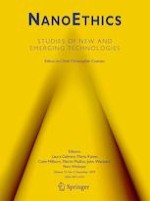