Create an alert for Ethics and Information Technology now and receive an email for each new issue with an overview and direct links to all articles.

This paper argues for subsuming the question of open data within a larger question of information justice, with the immediate aim being to establish the need for rather than the principles of such a theory. I show that there are several problems of justice that emerge as a consequence of opening data to full public accessibility, and are generally a consequence of the failure of the open data movement to understand the constructed nature of data. I examine three such problems: the embedding of social privilege in datasets as the data is constructed, the differential capabilities of data users (especially differences between citizens and “enterprise” users), and the norms that data systems impose through their function as disciplinary systems. In each case I show that open data has the quite real potential to exacerbate rather than alleviate injustices. This necessitates a theory of information justice. I briefly suggest two complementary directions in which such a theory might be developed: one defining a set of moral inquiries that can be used to evaluate the justness of data practices, and another exploring the practices and structures that a social movement promoting information justice might pursue.
Advertisement
next article The internet, identity and intellectual capital: a response to Dreyfus’s critique of e-learning 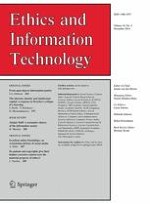 Alistair Duff: A normative theory of the information society

Do patents and copyrights give their holders excessive control over the material property of others?

The internet, identity and intellectual capital: a response to Dreyfus’s critique of e-learning