Motor movements increase the accessibility of the thought content and processes with which they typically co-occur. In two studies, we demonstrate that putting a hand on one’s heart is associated with honesty, both perceived in others and shown in one’s own behavior. Target persons photographed when performing this gesture appeared more trustworthy than the same targets photographed with both hands down (Study 1). Participants who put their hand on their hearts were more willing to admit their lack of knowledge (Study 2), compared to when they performed a neutral gesture. These findings replicate and extend the notion that bodily experience related to abstract concepts of honesty can influence both perceptions of others, and one’s own actions. 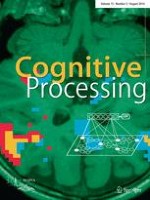 The impact of inhibition capacities and age on number–space associations

There is more to green reading than meets the eye! Exploring the gaze behaviours of expert golfers on a virtual golf putting task