Get 118-2017: State Primary Standard of the Units of Volumetric and Mass Flow Rates of Gas. History of Creation and Confirmation of Calibration, and Measurement Capabilities | springerprofessional.de Skip to main content
SEARCH MENU 1 2 3 4

The history of the creation of GET 118-2017, the State Primary Standard of the Units of Volumetric and Mass Flow Rate, is presented. The significant role of the international comparisons that were performed on different stages of the creation of GET 118-2017 is noted; results of comparisons were confirmed, which made it possible to incorporate into the KCDB database the calibration and measurement capabilities of the Russian Federation in the area of measurements of the volumetric flow rate of gas and also helped to determine the directions and measures designed to improve the standard. A patented method of comparison for calibration of critical nozzles implemented in GET 118-2017 for transmission to working standards of units of the volumetric and mass flow rate of gas is described. The designs, structure, and characteristics of GET 118-2017 are presented. More than 700 working standards of units of the volumetric and mass flow rates of gas used in the Russian Federation and certain member countries of COOMET are now traced to GET 118-2017, with the total number of applications to GET 118-2017 for transmission of the unit of a quantity exceeding 3500 annually.
Advertisement
previous article State Primary Standard of Temperature Unit in the Range 0–3200°C GET 34-2020: Practical Implementation of the New Definition of Kelvin
next article Optimized Reproduction, Collection, Transmission, Processing, and Display of Measurement Data Obtained Using the National Standard of Voltage Unit – Volt

Title
Get 118-2017: State Primary Standard of the Units of Volumetric and Mass Flow Rates of Gas. History of Creation and Confirmation of Calibration, and Measurement Capabilities
Authors
I. Gorchev
A. V. Mingaleyev
A. B. Yakovlev 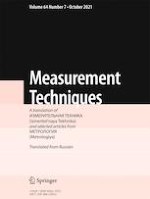 Comparisons of National Standards of the Unit of Length in the Field of Measuring the Parameters of Deviation from Flatness of Optical Surfaces Coomet.L-S15

Methods for the Realization of its-90 Fixed Points: Necessity of Improvement