Create an alert for Journal of Materials Science: Materials in Electronics now and receive an email for each new issue with an overview and direct links to all articles.

Ternary compounds Cu2SnS3, Cu2SnSe3 and Cu2Sn(S,Se)3 thin films used in thin film solar cell applications were prepared at the first time by such a two-stage process that includes dip-coating of Cu–Sn precursors as distinct from vacuum-based fabrication methods followed by sulfurization/selenization of prepared precursors via rapid thermal processing at 550 °C. All prepared thin films revealed Cu-poor composition. X-ray diffraction and Raman spectra of the samples showed that Cu2SnS3 and Cu2SnSe3 thin films had a monoclinic structure as a dominant phase and additionally some secondary phases such as tetragonal Cu2SnS3 and orthorhombic Cu3SnS4. However, the tetragonal and orthorhombic phases had more impact on Cu2Sn(SSe)3 thin film. Compact, dense, and small grained surface morphologies were obtained for the Cu2SnS3 and Cu2Sn(SSe)3 thin films, while the surface morphology of the Cu2SnSe3 thin film had larger grained surface morphology. The Cu2SnS3 thin film demonstrated higher transmittance (~ 65%) and two different absorption edges that indicates formation of two band gap energy. Band gap values of Cu2SnS3, Cu2Sn(SSe)3 and Cu2SnSe3 thin films were found 0.97 eV (and 1.51 eV), 1.25 eV and 0.78 eV, respectively. The lowest resistivity (2.48 × 10−1 Ω cm) and the highest carrier concentration (1.64 × 1019 cm−3) values were observed for Cu2Sn(SSe)3 thin film. 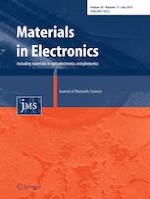 Inkjet printed graphene as an interconnect for optoelectronic devices