The primary intention of the current work was to appreciate the hydrochemistry characteristics and the water quality of the Euphrates river basin in Turkey. The water quality index technique (WQI) was adopted here for drinking criterion, while the United State salinity diagram and Wilcox’s diagram were constructed to assure the river expediency for irrigation standards. Factor analysis (FA) and cluster analysis (CA) were harnessed for identifying the paramount factors influencing the water quality and estimating the spatial variations amongst the sampling sites. It has been demonstrated that water–rock interactions have a pivotal influence on the river basin. It has been inferred from the Piper plot that water in the Euphrates basin is of Mg–HCO3 type. Alkaline earth metals and weak acids were prevalent rather than alkalis and strong acids. Besides that, silicate weathering is the dominant process within the river basin. Virtually, the majority of samples have met the drinking and irrigation standards. FA has revealed four factors that contributed to 71.453% of the total discrepancy in water quality while two disparate groups of similarities were uncovered between the sampling sites, reflecting palpable pollution levels within the river basin. 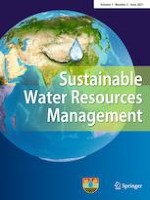 Design and sizing of a brewery wastewater treatment system in Douala, Cameroon: a technological solution for the protection of the environment in Sub-Saharan Africa

A systems approach to investigating non-functionality in rural water schemes: a case study