Geological lineaments or ‘geolineaments’, irrespective of their hydrological nature, are generally treated as a single class, and density of geolineaments is considered as a key hydrogeological factor influencing infiltration and recharge. However, all natural linear features do not behave alike in different hydrological events such as recharge and discharge. Considering this, the described study examines the role and influence of different types of geolineaments on the groundwater regime in the semi-arid crystalline Aravalli terrain of western India. Geolineaments have been classified with the aid of published geological maps, satellite imagery and selected field verification. Graphical analysis and statistical tests have revealed significant differences in the nature, role and efficiency of various geolineaments in terms of recharge and productivity. With respect to water-level fluctuation representing recharge and well productivity depicting discharge, reversal in hydrological efficiency is noticed for drainage lines (straight versus curvilinear), fold axes (antiformal versus synformal) and faults (vertical-slip versus lateral-slip). Analysis and comparison has revealed that the associated geological structures and their geometry, and hydraulic properties of the aquifers (vadose zone and saturated zone), are the key factors for the different nature, roles and efficiency of various geolineaments. 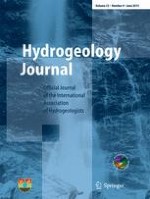