Motivated by symbolic ideology research and Social Identity Theory (SIT), this article introduces an original measure of ideological social identity (ISI) designed to capture feelings of psychological attachment to an ideological in-group and facilitate analysis of their attitudinal and behavioral effects. Data from a nationally representative sample of survey experimental participants indicates that the ISI scale is empirically distinct from ideological self-placement, the standard measure of symbolic ideology, and it conditions the effects of self-placement on vote choice in actual and hypothetical election scenarios. ISI is also common within the American public, particularly among conservatives, and responsive to environmental stimuli that make ideology salient including electoral competition and “new media” news sources. In addition to its immediate contributions, this research represents a necessary first step toward more fully exploiting the profound theoretical and empirical implications of SIT in studies of ideological identification.
Advertisement
next article Uninformed Votes? Reappraising Information Effects and Presidential Preferences 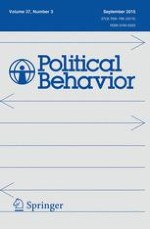 The Conditional Effect of Network Diversity and Values on Tolerance

Does Politics Influence Hiring? Evidence from a Randomized Experiment

Are Ballot Initiative Outcomes Influenced by the Campaigns of Independent Groups? A Precinct-Randomized Field Experiment Showing That They Are

Erratum to: Does Politics Influence Hiring? Evidence from a Randomized Experiment

Campaigns and the Mitigation of Framing Effects on Voting Behavior: A Natural and Field Experiment