As social beings, humans always interact with one another. The interactions were carried out in verbal or non-verbal language. Language is an arbitrary sound symbol system, which is used by members of a community to cooperate, interact, and identify themselves [ 1]. This definition implies that language has a special character which is the identity of a country and domain of a dialog topic. In verbal communication, people use sentences in the forms of consist of words or series of words to express a complete meaning. Indonesian language is classified into two categories, namely formal and non-formal in the method of use. Indonesian formal is used in formality situation, while Indonesian non-formal is widely used in a casual situation like in social media conversations [ 2]. In formal language, people use “standardized” language as prescribed by linguistic rules of the language. However, for communication, especially in casual conversations, social media, or non-formal discussions, people often tend to communicate using non-formal language [ 3].
In online conversation, however, the language category that is mostly used is non-formal language, namely “Bahasa Slang”. “Bahasa slang” is a term used to refer to a non-formal language that is formed from abbreviations, terms, or a combination of both [ 4]. The simplicity of non-formal language makes people tend to use it in their communication. Communication uses non-formal language is brief, but it can be easily understood by every person. As mentioned above, non-formal language tends to deviate grammatical rules. The example of deviations is found in suffixation and abbreviated words. In non-formal Indonesian correspondence, words are shortened by omitting the vowels, for example “saya” (I) is abbreviated as “sy”, “tolong” (help) abbreviated as “tlg”, “bayar” (pay) abbreviated as “byr”, and so on. The suffixes that are not a part of Indonesian grammar i.e. “in” make the formal language transform into non-formal language [ 5], for example “bayarin” (pay), “tolongin” (help), “cetakin” (print), and so on. In Indonesian grammar “in” belongs to infixes that consist of “-er-“, “-el-“, “-em-“, and “-in-“ [ 6]. Beside the suffixes and abbreviations, the non-formal language is also formed using loanword, for examples “cancel”, “booking”, “issued”, and so on. The others Indonesian non-formal are the words that are deformed from the original word, for example “sendiri” (alone) into “jomblo”, “santai” (relax) into “santuy”, “lambat” (slow) into “lambreta”, and so forth.
Advertisement
In linguistic computation, the non-formal language comes to problems in data pre-processing which mostly comprises tokenizing, removing, stemming, and normalizing. Among the problems in data pre-processing, however, stemming is a key factor to prepare the data to be analyzed to get an accurate result [ 7]. Stemming is the process to remove affixes to get the root words, for example “berlari” (running) into “lari” (run), “menulis” (writing) into “tulis” (write), “memakan” (eating) into “makan” (eat), and so on [ 8]. The sample words mentioned above are formal words that do not have a problem in stemming. The problem, however, is in non-formal, the words which are deviated from Indonesian standard words, for example in sentences like “sistemnya lambreta bingit” (the system is very slow). “Lambreta” and “bingit” are not formal Indonesian words, so they will raise a problem in the stemming process. Formal words in Indonesian are words that are contained in the Big Indonesian Dictionary (KBBI).
Some research on Indonesian text processing had been done by using the existing Indonesian stemmer, i.e. “Sastrawi”. The research and improvements of “Sastrawi” algorithm were also done by using dynamic affixes to process non-formal Indonesian. However, the result of their research had limitations on non-formal Indonesian expressions, which were formed into abbreviated and deformed words.
This research was the first step of three-phase research concerning empathetic chatbots for airline ticket reservations. The stages of the research include (1) Indonesian closed corpus development; (2) Emotion and intent classification development; and (3) Chatbot development. The purpose of the first step was to develop an Indonesian closed corpus that can be used as a dictionary and stemming method on formal and non-formal Indonesian. The term closed corpus shows that the developed corpus has a special purpose in a particular domain. In this study, the corpus developed should process sentences on airline ticket reservations, which will apply to chatbots as a substitute for customer service staff. This corpus is important for the stemming process, so it can produce a classifier model that has high accuracy. High accuracy will affect the prediction accuracy for the chatbot to respond to user requests. On the other hand, a corpus is an important part of language synthesis systems which will affect in synthesis quality of speech [ 9]. However, the Indonesian corpus for non-formal Indonesian especially for “bahasa slang” is still incomplete, so this corpus is needed.

Raw data in this research were collected from the conversation between customer service staff and consumers in airline ticket reservations, namely “OkeTiket” through WhatsApp messenger. By using this method, vocabularies that widely used in airline ticket reservations will be collected. That is important because it is a rule in language learning [ 23]. Data were converted into Comma-Separated Values (CSV) to facilitate further processing using the Python programming language, which has high compatibility with CSV files [ 24– 27]. The step-by-step data pre-processing is shown in Fig.  1.
×
Officially “OkeTiket” uses the WhatsApp service to communicate with its members. The data generated from this communication is a text file that is entirely “OkeTiket’s” property, so that there is no legal violation in using the data for research. The process of data acquisition was done manually by exporting data per member using a smartphone. The result of this activity are 200 files in text format with variations in the number of conversations that vary from one file to another. These files were combined in Microsoft Excel and saved as into CSV format.
Python programming is highly recommended for natural language processing because it has a library to be used, i.e. Natural Language Toolkit (NLTK). By using NLTK, pre-processing activities such as case folding, tokenizing, and stop word removal can easily be done. This is one of the reason Python programming language was used in this study.
In the stemming activity, however, researcher provided an alternative tool which was compared with the existing Indonesian stemming method. The existing stemming method which is widely used for Indonesian language processing is “Sastrawi”. However, “Sastrawi” has a weakness in non-formal Indonesian language processing, so refined to produce the right data are needed. An alternative stemming method is dictionary-based, which has a collection of words in Indonesian both formal and non-formal. The method was used in stemming process is string matching by using Structure Query Language.
Following the data converting, the next process is case folding. A case folding is a process to convert letters in the text documents into uppercase or lowercase. In-text processing, however, case folding was used to convert letters into lowercase. Its processes were done by using “lower ()” as a function of NLTK. The next process was tokenizing to split sentences into tokens by using space detection. Its processes resulted in about 74.477 tokens which were verified in Indonesian rules correctly. According to the step of data pre-processing in Fig. 1, verifications were done by using a process namely “Filtering”.
The filtering activity cannot be fully carried out using algorithms because it deals knowing that only humans know. For example, to detect a token is a word or not a word. The tokens consist of passenger names, email addresses, booking codes, and so on. In the case of email addresses, detecting can be done by using a regular expression with the marker “@”, but for the name of the person or the booking code, algorithm and technique to identify it was not available yet. Related to this problem, a manual process by human assistance to identify the tokens are needed.
Following the activity process in filtering is stop word removal and cleared tokens from number, special characters, and punctuations. Both processes are an important factor to eliminate grammatical useless words in Indonesian like “di” (in), “pada” (on), “dari” (of), “yang” (that), and so on. Before the process of stop word removal and cleared tokens, however, the length of tokens that less than three characters was eliminated. Besides, in the grammatical word categories, many tokens are not a part of Indonesian words for example booking code, passenger name, date of flight, routes of flight, and so on. The result of filtering processes was 1.009 words which were suitable for the Indonesian dictionary.
Stemming is the next process after filtering to get root words from each token. The stemming method used in developing corpus was “Sastrawi”, however, there was also verification which was done manually. In information retrieval, stemming has two main functions. The first function is to improve the ability of the information retrieval system to select the appropriate documents, and the second function reduces the size of the vocabulary by mapping variants based on root words [ 28]. Inserting data into the corpus table is the parallel process after the stemming process was done.
The final process in developing corpus was normalizing, which needed focus and involved three persons from linguistic discipline to normalize the corpus data. The normalizing processes were done by using several resources of Indonesian rules related to abbreviations and loanwords. The process collected 5.120 variants of words consists of abbreviations, loanwords, and affixes. The number of corpus data was small relatively, so the additions of Indonesian word collections were needed. The addition of words had been done by using source from Indonesian Natural Language Processing (NLP) of 29.605 words, so the total number of corpus data was 30.614 words. Overall, the data acquisition and pre-processing to develop a corpus is shown in Algorithm 1.
×

This research aimed to develop Indonesian dynamic closed corpus namely “Incorbiz”, which can be used as an alternative stemming method to process formal and non-formal Indonesian. When it was created, the “Incorbiz’s” word collections are 30.614 root words, however, the number of word variants is still limited on 5.120, because editing and normalizing is not finished yet. This research also compared two stemming technique i.e. “Sastrawi” and “Incorbiz” to process the 550-sample of dataset. The result showed that stemming by using “Incorbiz” had a level of accuracy more than “Sastrawi” on 0.85 and 0.73, respectively.

I would like to say a special thanks to my supervisor team for their guidance, and overall insights in this field that have made this an inspiring experience for me. I would also like to thank “OkeTiket” who participated in this research. Finally, I would like to thank Universitas Teknologi Yogyakarta for supporting and facilitating this research.

Ethics approval and consent to participate

The authors declare that they have no competing interests.
Open AccessThis article is licensed under a Creative Commons Attribution 4.0 International License, which permits use, sharing, adaptation, distribution and reproduction in any medium or format, as long as you give appropriate credit to the original author(s) and the source, provide a link to the Creative Commons licence, and indicate if changes were made. The images or other third party material in this article are included in the article's Creative Commons licence, unless indicated otherwise in a credit line to the material. If material is not included in the article's Creative Commons licence and your intended use is not permitted by statutory regulation or exceeds the permitted use, you will need to obtain permission directly from the copyright holder. To view a copy of this licence, visit http://​creativecommons.​org/​licenses/​by/​4.​0/​. 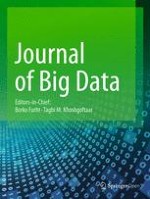 A data value metric for quantifying information content and utility