The online version of this article (https://​doi.​org/​10.​1007/​s00267-020-01413-2) contains supplementary material, which is available to authorized users.
Publisher’s note Springer Nature remains neutral with regard to jurisdictional claims in published maps and institutional affiliations. 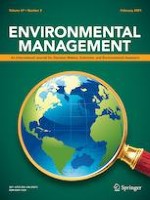 Potential Movement Corridors and High Road-Kill Likelihood do not Spatially Coincide for Felids in Brazil: Implications for Road Mitigation

Translating a Global Emission-Reduction Framework for Subnational Climate Action: A Case Study from the State of Georgia

Values Matter: The Role of Key Nodes of Social Networks in an Environmental Governance Case from Taiwan