» Get access to the full-text
Important notes
Manuscript submitted November 28, 2016.

The influence of heavy fermion Ytterbium substitution was investigated on the crystal, electronic, and magnetic properties of CuFeO2 with the general formula Yb x Cu1−x FeO2. The results of the crystal structure study revealed polycrystalline formations in the sample. The electronic and magnetic properties of the samples were studied using X-ray absorption spectroscopy (XAS) and X-ray magnetic circular dichroism (XMCD) techniques. Both XAS and XMCD revealed that the substituted Yb atoms govern the entire phenomena with their narrow 4f levels by forming broader molecular bonds with the 3d levels of the transition metals. Owing to the prominent changes caused by the activity of the 4f electrons in the crystal structures, Yb atoms were determined to be the main “role player” in the phase transitions. XMCD measurements were performed at room temperature 300 K (27 °C) to determine the magnetic properties of the samples and, except for CuFeO2 (x = 0.0), the samples were observed to be ordered magnetically (mainly ferrimagnetic) in the bulk. 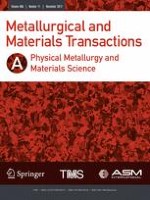 Extension of the Mechanical Threshold Stress Model to Static and Dynamic Strain Aging: Application to AA5754-O