A new and general approach is proposed for interpolating 6-h precipitation series over large spatial areas. The outputs are useful for distributed hydrological modelling and studies of flooding. We apply our approach to large-scale data, measured between 2014 and 2016 at 159 weather stations network of Meteo Romania, using weather radar information and local topography as ancillary data. Novelty of our approach is in systematic development of a statistical model underlying the interpolation. Seven methods have been tested for the interpolation of the 6-h precipitation measurements: four regression methods (linear regression via ordinary least squares (OLS), with and without logarithmic transformation, and two models of generalized additive model (GAM) class, with logarithmic and identity links), and three regression-kriging models (one uses semivariogram fitted separately every 6-h, based on the residuals of the GAM with identity links models, and other two with pooled semivariograms, based on the OLS and GAM with identity links models). The prediction accuracy of the spatial interpolation methods was evaluated on a part of the dataset not used in the model-fitting stage. Due to the good results in interpolating sub-daily precipitation, normal general additive model with identity link followed with kriging of residuals with kriging parameters estimated from pooled semivariograms was applied to construct the final 6-h precipitation maps (PRK-NGAM). The final results of this work are the 6-h precipitation gridded datasets available in high spatial resolution (1000 m × 1000 m), together with their estimated accuracy. 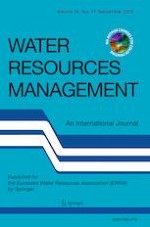