Model uncertainties in life cycle assessment (LCA) can arise due to the lack or limited knowledge of the system (epistemic), or due to the inherent spatial and/or temporal variability of the processes that characterize it (stochastic). Scenario analysis is often used to address such uncertainties. However, the analysis does not provide information on which scenario is more representative of the system, or more likely to occur. To account for model uncertainties in LCA, the approach presented here estimates the likelihood of occurrence of the scenarios by assigning probabilities to the events characterizing them.

An integrated life cycle assessment (LCA) and quantitative risk assessment (QRA) approach was developed to include the likelihood of occurrence of future events, and their consequences, in the definition of one representative scenario. The integration of the two tools was conceived at a framework level, with the inclusion of probability estimates as weighting factors for the scenario results. These probability estimates for each scenario allow improving the spatial and temporal representativeness of the model of the system.
The approach was applied to a landfill case study to test its applicability in defining the impacts of a landfill reference scenario. Twelve scenarios were developed to represent the potential variation of landfill conditions over time. In particular, the degradation and failure of the containment systems, and the flooding of the site, were the main events considered in the scenario definition. An event tree was built to estimate the probability of occurrence of each scenario.

Overall, the results of the study highlight the potential of the approach and the relevance of the information that the results can provide on the impact of a landfill, and more generally a system, under varying conditions over time. 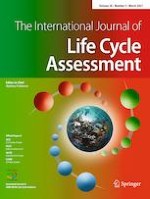 LCA FOR MANUFACTURING AND NANOTECHNOLOGY

Selecting the best product alternative in a sea of uncertainty