Create an alert for Russian Journal of Nondestructive Testing now and receive an email for each new issue with an overview and direct links to all articles.

The most popular transducers used in ultrasonic testing are piezoelectric transducers. The three major components of a piezoelectric transducer are the crystal, backing material, and matching layer. Traditionally, the optimal combination of these components is either found by trial and error or by using simple analytical models. These procedures make it difficult or even impossible to find the cause of poor performance or deficiencies in manufactured transducers. Finite element modeling is an alternative method that can be used for designing optimal piezoelectric transducers while avoiding limitations set forth by one-dimensional analytical models. In this paper, the effects of various parameters on the performance of a piezoelectric transducer are investigated by finite element simulations and experimental measurements. The aim is implementation of a design tool for optimizing the performance of a custom-made ultrasonic transducer. The complete transducer structure, including the piezoelectric disk, backing material, and matching layer are modeled in both transmit and receive modes. In most of the previous finite element models, either distributed force or distributed displacement is applied to the nodes to simulate the effect of the piezoelectric crystal. However, in this paper, actual piezoelectric elements are used to generate ultrasonic waves. Consequently, the input to this model is an electrical pulse, and the output is an electrical voltage. This is exactly like what we have in real world. Therefore, the performance of this model is exactly the same as a real piezoelectric transducer. The results show that undesired echoes can be eliminated by increasing the attenuation of the backing material. Moreover, for matching layer impedances less than 5 MRayl, with an increase in impedance value, both the transducer bandwidth and the echo amplitude increase. For matching layer impedances higher than 5 MRayl, the frequency spectrum is double-humped, and detection of flaws is less accurate. Experimental measurements conducted on an in-house built transducer are found to be in good agreement with simulation results. 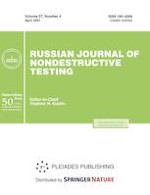