Economic nebulizer spray pyrolysis (NSP) technique has been employed to deposit Neodymium (Nd) doped Tin disulfide (SnS2) thin films at 325 °C by varying the doping concentration of Nd (0%, 2%, 4% and 6%). The impact of Nd concentration on crystalline structure, morphology and opto-electronic properties of films were studied using X-ray diffraction (XRD), FT-Raman spectrophotometer, atomic force microscope (AFM), energy-dispersive X-ray spectroscope, scanning electron microscope (SEM), UV–Visible spectrometer and Hall Effect measurements. Structural parameters such as lattice constants, texture orientation factor, micro strain, dislocation density and crystallite size were estimated using XRD data. The SEM and AFM images of films displayed an exceptional morphology. The surface roughness of the films was found to increase with the increase of dopant concentration. Optical analysis done on the films revealed variation in band gap from 2.75 to 2.92 eV as the Nd doping concentration is increased from 2 to 6%. SnS2 thin film exhibited n-type conductivity as, confirmed from Hall Effect studies. The resistivity and concentration of the carrier in the film were found to be 4.17 × 10−2 Ω cm and 4.06 × 1017 cm−3 respectively which were then correlated to the deposition parameters. Furthermore, FTO/n-Nd-SnS2/p-SnS hetero-junction based solar cells were prepared and their current voltage curve in dark condition was obtained. 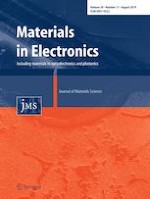 Fabrication and enhanced dielectric constant of nanocomposite films based on polyimide and core–shell structured Al2O3@0.4mol%Nb-(Ba0.87Sr0.04Ca0.09)(Ti0.86Zr0.08Sn0.06)O3 nanoparticles