Is the WTO Dispute Settlement System a Disaster for the U.S.? An Evaluation of U.S. – China WTO Disputes | springerprofessional.de Skip to main content
SEARCH Menu 1 2 3 4

Create an alert for Journal of Chinese Political Science now and receive an email for each new issue with an overview and direct links to all articles.

Since China’s accession to the World Trade Organization (WTO), the WTO dispute settlement system (DSS) has resolved an impressive number of US–China trade disputes. Over the past few years, however, as tensions between the two have escalated over several trade issues, the WTO has been pushed toward irrelevance since the Trump administration. Alleging that the WTO is “a disaster” and its adjudication is very unfair to the US, former President Trump made no effort to hide his criticism of the WTO and its DSS in particular. Is Trump right about the WTO DSS? Based on an examination of US–China WTO disputes and the WTO adjudicators’ highly contentious interpretations of the concept of “public body” under the Agreement on Subsidies and Countervailing Measures (the SCM Agreement) as an example, this article shows that the WTO DSS is not particularly unfair to the US. While the WTO adjudicators sometimes did not fully follow the positions advocated by the US, they have adhered to generally accepted rules of treaty interpretation and exercised great caution to remain balanced and flexible in reaching their conclusions, especially on ambiguous issues. Though not perfect, the WTO DSS works as it is intended to. Engaging in the reform of the WTO and its DSS, instead of abandoning or marginalizing the WTO, should be a wiser and more practical choice for the Biden administration.
Advertisement 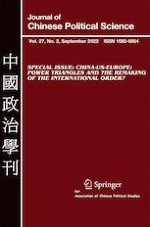 No Common Ground: A Spatial-Relational Analysis of EU-China Relations

William Hurst, Ruling Before the Law: The Politics of Legal Regimes in China and Indonesia

The Illusion of the China-US-Europe Strategic Triangle: Reactions from Germany and the UK