Is there a selection bias in roll call votes? Evidence from the European Parliament | springerprofessional.de Skip to main content
SEARCH MENU 1 2 3 4

We examine the magnitude and significance of selection bias in roll call votes. Prior to 2009, all recorded (roll call) votes in the European Parliament had to be requested explicitly by European Political Groups. Since 2009, a roll call vote has been mandatory on all final legislative votes. We exploit that change in the rules and compare differences between final legislative votes, amendment votes and non-legislative votes before and after 2009, using a difference-in-differences approach with extensive controls. Using data from the Sixth (2004–2009) to Seventh (2009–2014) European Parliaments, we fail to find any large differences in voting cohesion for the main political groups. We find even less significance when we control for changes in parliamentary membership between those two periods. The results suggest that selection biases in the European Parliament associated with strategic choices are negligible.
Advertisement
previous article Polarized preferences versus polarizing policies
next article Dynamic ideal point estimation for the European Parliament, 1980–2009 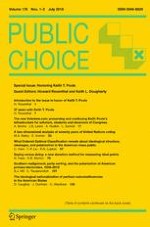 Dynamic estimation of ideal points for the US Congress

Polarization and ideological congruence between parties and supporters in Europe

Introduction to the issue in honor of Keith T. Poole