» Get access to the full-text
Important notes
This work was supported in part by the Natural Science Foundation of the Jiangsu Higher Education Institutions of China (No.19KJB510030) and in part by the open research fund of National Mobile Communications Research Laboratory, Southeast University (No. 2020D18).

This paper investigates the wireless powered mobile edge computing (WP-MEC) system, which consists of an energy transmitter (ET) with multiple antennas, an MEC server and multi wireless devices (WDs) with single antenna. The ET transfers energy to WDs via energy beamforming. Each WD harvests energy to power its operations, i.e., computing tasks locally and offloading partial tasks to the MEC server. A practical nonlinear energy harvesting (EH) model is adopted to describe the relationship between energy transmitting and harvesting. In the context of the nonlinear EH model, energy constraints between harvesting and comsumption at WDs is analyzed and an optimization problem to maximize the weighted sum computation rate of the system is formulated. The transmitting power allocation among different energy beams at the ET and computation offloading at WDs are jointly optimized to make full use of energy and computing resources. Since the nonlinear EH model is nonconvex, it is hard to solve the formulated problem. By exploiting the successive convex approximation method, an iterative optimizing scheme called JOEO (Joint Offloading and Energy Optimization) is proposed. Simulation results in the final part indicate the convergence and superiority of the JOEO scheme over other benchmark schemes under different system parameters. 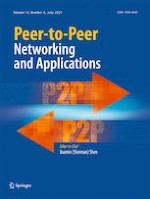 MASK: Efficient and privacy-preserving m-tree based biometric identification over cloud