Lessons from the European Regulation 1223 of 2009, on Cosmetics: Expectations Versus Reality | springerprofessional.de Skip to main content
TOOLBAR 1 2 3 4
SEARCH MENU 1 2 3 4

The aim of this paper is to conduct an analysis of the application of the specific rules of nanotechnology incorporated in Regulation No. 1223/2009 of the European Parliament and of the Council of 30 November 2009 on cosmetic products. It has been ten years since the European Commission had issued its proposal to start the co-decision procedure to create Regulation 1223 of 2009. Although it has been praised for noting the regulatory difference of nanomaterials over the rest of the chemicals, what has been the efficacy of the standard? It is concluded that despite what it meant, the regulation has encountered technical obstacles, thus rendering the objectives relating to nanotechnology that were proposed from the European Commission unfulfilled. This finding is inferred through legal dogmatic methodologies and the identification of nanomaterials that have not been expressly approved. Nevertheless, products incorporating nanomaterials still circulate in the European market. The precepts about nanotechnology in the regulation should be reviewed because technical inconsistencies should be avoided in future regulations or applicable regulations in contexts other than Europe. Such inconsistencies exist with respect to the high level of protection of human health that should be ensured and the provisions intended to protect consumer safety. For instance, the catalog of nanomaterials in circulation does not indicate the materials that have been approved or their toxicological profiles. To date, no comparison studies have been presented between the expectations and legislative objectives set as embodied in the regulation and debated in the European Parliament involving the actual efficacy of this regulation. 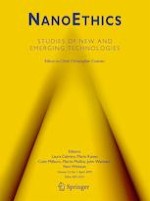 Nation-Building and the Governance of Emerging Technologies: the Case of Nanotechnology in India

World Community; and Remarks on our Own Behalf

Models of Anticipation Within the Responsible Research and Innovation Framework: the Two RRI Approaches and the Challenge of Human Rights