» Get access to the full-text
Important notes
Communicated by Matthias Finkbeiner.

Despite the benefits in human health from pharmaceuticals, their production has simultaneously given rise to severe environmental pollution. Using ciprofloxacin hydrochloride production as an example, the objectives of this study were to determine the key materials and stages in the life cycle of pharmaceutical production and to develop methods to prevent high materials/energy consumption and pollution.

The environmental impacts were evaluated by the Eco-indicator 99 (EI 99) method built into the Ecoinvent database of the Simapro software. The functional unit was set to the annual production of 280 million ciprofloxacin hydrochloridet tablets. The data in this study regarding the process parameters, raw materials energy consumption, and the emissions of pollutants were provided by a pharmaceutical enterprise located in the Zhejiang province, China. The complete production process was classified into three stages, active pharmaceutical ingredient (API) synthesis, galenic formulation, and packaging following the product category rules (PCR) for pharmaceuticals.

API synthesis had the largest environmental contribution, followed by galenic formulation, and packaging, which accounted for 42.9%, 41.9%, and 15.2%, respectively. The most important influencing factors of the first two stages were polyols which represent solvents or reaction media used and electricity (coal-fired generation). The damage categories of both factors were ranked from high to low as follows: human health, resources, and ecosystems. The ecological index points of human health in the API synthesis decreased by 8 k point (kPt) after solvent replacement, by 4 kPt after coal-based electricity generation was replaced with natural gas, and by 12 kPt after simultaneous optimization.

The proposed improvements for cleaner production all proved the feasibility of environmental sustainability in pharmaceutical production. Compared with energy optimization, the solvent replacement was a more effective and convenient method to reduce the environmental impact of ciprofloxacin hydrochloride production. 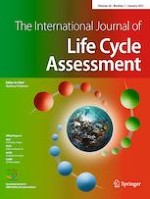 POLICIES AND SUPPORT IN RELATION TO LCA

The assessment of positive impacts in LCA of products