Previous studies reported that single-phase liquid curtains become more stable with increasing Ohnesorge number. Many liquid films used in the coating industry are types of emulsion samples. Despite this fact, the effect of multiphase liquids on the dynamics of the curtain breakup has not yet been considered. This study explores the stability of emulsion curtain coating via high-speed visualization. The critical condition at the onset of curtain breakup was determined by finding the flow rate below which the curtain broke. Curtain breakup was observed via a hole initiation within the curtain. The results reveal that curtain breakup dynamics is governed by the characteristic dynamic viscosity and the surface tension. The emulsion curtain stability, defined by Weber number, increases as Ohnesorge number rises, similar to the single-phase liquid (i.e., Newtonian and pure shear thinning) curtain stability. The critical web speed at which the contact line moves upstream of the curtain, a phenomenon called heel formation, and that at which air entrainment occurs, were determined for emulsion solutions at different flow rates. The results reveal that the surface tension increase delays the onset of air entrainment which could help to conduct faster curtain coating substrates with emulsion liquid films.
Advertisement
previous article Assessment of sparkle and graininess in effect coatings using a high-resolution gonioreflectometer and psychophysical studies
next article Effect of humidity on curing of alkoxysilane-functionalized alkyd coatings 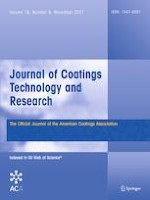 Synthesis, analysis, and application of lactide-based polyester as coating with improved mechanical and rheological behavior

Polymerizable allyl anionic and nonionic emulsifier: synthesis and properties of its emulsion for architectural coating