main-content
Top
Back to the search result list
​
print
Table of Contents
​
insite
Issue archive
​
archive
​
insite
Print
​
print
​
share
previous article Thermal Stabilization of NiTiCuV Shape Memory A...
next article The Influence of the R-Phase on the Superelasti...

Strain and temperature profiles of magnetron-sputtered ferroelastic TiNi-based films of 20 μm thickness are investigated during tensile load cycling with respect to strain, strain rate, and cycle number in order to assess their potential for elastocaloric cooling. Two different ferroelastic film specimens are considered, binary TiNi and quaternary TiNiCuCo films, which strongly differ regarding their phase transformation hysteresis and fatigue behavior. In situ digital image correlation and infrared thermography measurements reveal a correlated response of strain and temperature bands that is determined by mesoscale stress and temperature fields on the kinetics of phase transformation. In the case of binary TiNi films, this response is also strongly affected by cycling-induced fatigue causing vanishing band formation and decreasing elastocaloric effect size. In contrast, TiNiCuCo films show negligible fatigue and retain the local characteristics of the elastocaloric effect. Compared to TiNi films, they exhibit not only a reduced temperature change, but also a reduced work input for pseudoelastic cycling resulting in an improved material’s coefficient of performance of 15. 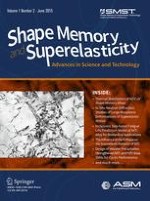 Investigation on Crack Tip Transformation in NiTi Alloys: Effect of the Temperature