Create an alert for Biodiversity and Conservation now and receive an email for each new issue with an overview and direct links to all articles.

A number of studies analysing the structure of butterfly communities on Mediterranean islands have confirmed the well-established pattern of a current decrease in species richness in island communities. However, these studies generally lack quantitative data on butterfly population densities across habitats and over time. This precludes testing the hypotheses of ecological release, niche expansion and density compensation in island populations and their links to the presence of fewer competitors and/or predators. Here we use long-term monitoring data on butterfly populations from five sites on Menorca (Balearic Islands) and 20 sites from continental Catalonia (NE Spain) to test several hypotheses regarding island biogeography. We first confirm that island butterfly assemblages are not only impoverished versions of their continental counterparts but also have an over-representation of habitat generalists and highly mobile species. On the other hand, we did not find a consistent phenomenon of niche expansion and density compensation was only found for Celastrina argioulus and Gonepteryx cleopatra. Given the absence of habitat specialists on islands and the severe population declines taking place amongst specialist species on mainland Catalonia in the past two decades, we expected to detect more positive trends in island butterfly communities. Instead, we noted widespread declines, comparable to those previously recorded on the continent. Both the extension of the summer drought on Menorca and general habitat degradation due to the abandonment of cattle and sheep grazing may be responsible for these general declines.
Advertisement
previous article The effect of cyanobacterial blooms on bio- and functional diversity of zooplankton communities
next article Modeling algorithm influence on the success of predicting new populations of rare species: ground-truthing models for the Pale-Belly Frost Lichen (Physconia subpallida) in Ontario 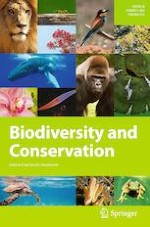 Brazil in the mud again: lessons not learned from Mariana dam collapse

Patterns in island endemic forest-dependent bird research: the Caribbean as a case-study