A number of features, including the appearance of irreversible spontaneous and magnetic-field-induced low temperature transitions accompanied by a relatively sharp increase in magnetization, are identified by analyzing the experimental results obtained in a study of the magnetostructural and magnetocaloric properties of the Mn1 – xCoxNiGe (0.05 ≤ x ≤ 0.80) system. These transitions are most clearly observed in the concentration range 0.15 ≤ x ≤ 0.40 at temperatures much lower than the characteristic temperatures of second-order isostructural transitions from the paramagnetic hexagonal state to the ferromagnetic hexagonal one. The main purpose of this study is a theoretical analysis of low temperature features against the background of features observed in the entire concentration range 0.05 ≤ x ≤ 0.40. The phenomenological description of the experimental results is based on the concept of a soft mode for structural transitions between hexagonal and rhombic crystal structures when an internal orthogonal field that has an effect on the orthogonal spin component is used in the Heisenberg Hamiltonian. As was found for the spin subsystem within the molecular field approximation and for the structural subsystem within the shifted harmonic oscillator approximation, a number of features comparable to the features experimentally observed for 0.05 ≤ x ≤ 0.1 and 0.1 < x ≤ 0.4 can come to light, which is dependent on the ratio between the orthogonal field and the exchange and structural contributions that describe the interaction of the spin and structural subsystems.
Advertisement
previous article Study of Heat Transfer Processes in a System Containing Fe–Rh Microwires
next article Direct and Inverse Magnetocaloric Effect in a Ni50Mn35Al2Sn13 Heusler-Alloy Ribbon Sample 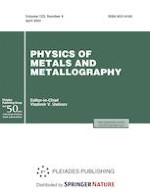 Thermophysical and Magnetocaloric Properties of the LaFe11.1Mn0.1Co0.7Si1.1 Alloy

Magnetocaloric Effect in Metals and Alloys