A series of sol–gel derived Al-doped ZnO (AZO) thin films with rapid thermal annealing process at low temperature were studied to examine the influence of annealing temperature and the Al doping concentration on their microstructure, electrical and optical transport properties. Crystalline AZO thin films were obtained following an annealing process at temperatures between 400 and 600 °C for 10 min in argon gas ambient. AZO thin films with Al doping of 1 at% were oriented more preferentially along the (002) direction, and have larger grain size and lower electrical resistivity, while the highest average optical transmittances of 92% were observed in AZO films with Al doping of 2 at%. With the annealing temperature increasing from 400 to 600 °C, the grain size of AZO films increased, the optical transmittance became higher, and the electrical resistivity decreased to a lowest value of 1.2 × 10−4 Ω cm resulting from the increase of the carrier concentration and the mobility. 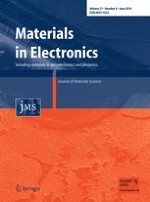 Cobalt: a universal barrier metal for solderable under bump metallisations