We study a general kind of partial information nonzero sum two-player stochastic differential games, where the state variable is governed by a stochastic differential equation and the control domain of each player can be non-convex. Moreover, the control variables of both players can enter the diffusion coefficients of the state equation. We establish Pontryagin’s maximum principle for open-loop Nash equilibria of the game. Then, a verification theorem is obtained for Nash equilibria when the control domain is convex. Finally, the theoretical results are applied to studying a linear-quadratic game.
Advertisement
previous article Asymmetric Information and Differentiated Durable Goods Monopoly: Intra-Period Versus Intertemporal Discrimination
next article Multiple Capture of a Given Number of Evaders in the Problem of Simple Pursuit with Phase Restrictions on Timescales 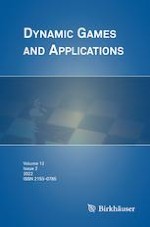