A key issue in the business ethics field is the design of effective measures for assessing the ethical culture of organizations. The Corporate Ethical Virtues Model (CEV), developed by Kaptein in 2008, is an instrument for measuring ethical culture, and has been applied, adapted and validated in different contexts. In 2013, DeBode, Armenakis, Field and Walker developed the CEV–S, a shortened version of the original scale. Both the CEV and CEV–S assess eight dimensions based on corporate ethical virtues: clarity, congruency of supervisors, congruency of senior management, feasibility, supportability, transparency, discussability and sanctionability. The objective of this study is to present a Spanish version of the CEV–S and its validation process. The scale was applied to two samples of 114 and 193 Colombian employees from two companies operating in the services sector. The confirmatory factor analyses revealed a good fit for the eight-factor structure of the Spanish CEV–S and the statistical tests applied showed good levels of reliability and validity for this scale. The adequate psychometric properties shown by the Spanish CEV–S may support its use in future research to measure organizational ethical culture in Spanish-speaking settings.
Advertisement
previous article Is Machiavellianism Dead or Dormant? The Perils of Researching a Secretive Construct
next article Is Interpersonal Guanxi Beneficial in Fostering Interfirm Trust? The Contingent Effect of Institutional- and Individual-Level Characteristics 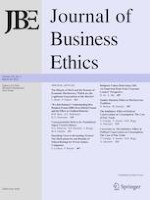 Correction to: The Inhibitory Effect of Political Conservatism on Consumption: The Case of Fair Trade

The Illusion of Merit and the Demons of Economic Meritocracy: Which are the Legitimate Expectations of the Market?

The Inhibitory Effect of Political Conservatism on Consumption: The Case of Fair Trade