Potential applications of thin films of metal-organic frameworks (MOFs) cover widespread areas, including advanced optics, electronics, and magnetics. Controlling location and orientation of MOF crystals on a device-scale (over the centimeter scale) substrate is crucial to achieve these applications. Metal hydroxides are advantageous precursors for the MOF synthesis because of their high reactivity with organic linkers, allowing the crystallization of MOFs under mild conditions in a harmless solvent at a room temperature. In addition, the reaction scheme using metal hydroxides as precursors allows to fabricate MOF crystals on polymer, metal and ceramics substrates, where in some cases, substrates with deformability or 3D microstructures can be employed. In this perspective, our recent advances on the fabrication of MOF thin films grown on assemblies of metal hydroxide nanocrystals are reviewed. The present approach enables us to control both position and orientation of MOF crystals on a substrate. The aligned MOF films exhibit anisotropic properties by accommodating functional molecules in their micropores. The materials demonstrated here are considered as good candidates for solid catalysts, bio-sensors, anisotropic electrical/optical devices, and others.
× 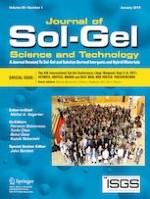