In the present work, silicon based micromixer microfluidic devices have been fabricated in silicon substrates of 2-inch diameter. These devices are of 2-input and 1-output port configuration bearing channel depth in the range 80–280 µm. Conventional reactive ion etching (RIE) process used in integrated circuit fabrication was modified to get reasonably high silicon etch rate (~1.2 µm/min). It was anticipated that devices with channel depth in excess of 150 µm would become weak and susceptible to breakage. For such devices, a bonded pair of silicon having a 0.5 µm SiO2 at the bonded interface was used as the starting substrate. The processed silicon wafer bearing channels was anodically bonded to a Corning® 7740 glass plate of identical size for fluid confinement. Through-holes for input/output ports were made either in Si substrate or in glass plate before carrying out anodic bonding. Micro-channels were characterized using stylus and optical profiler. Surface roughness of the channel was observed to increase with increasing channel depth. The devices were packaged in a polycarbonate housing and pressure drop versus flow rate measurements were carried out. Reynolds number and friction factor were calculated for devices with 82 µm deep channels. It was observed that up to 25 sccm of gas and 10 ml/min of liquid, the flow was laminar in nature. It is envisaged that using bonded silicon wafer pair and combination of RIE and wet etching, it is possible to get an etch stop at the SiO2 layer of the bonded silicon interface with much smaller value of surface roughness rendering smooth channel surface. 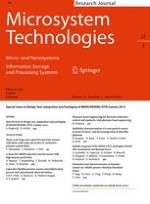