The converging Richtmyer–Meshkov (RM) instability on single- and dual-mode \(\hbox {N}_2\)/\(\hbox {SF}_6\) interfaces is studied by an upwind conservation element and solution element solver. An unperturbed case is first considered, and it is found that the shocked interface undergoes a long-term deceleration after a period of uniform motion. The evolution of single-mode interface at the early stage exhibits an evident nonlinearity, which can be reasonably predicted by the nonlinear model of Wang et al. (Phys Plasmas 22: 082702, 2015). During the deceleration stage, the perturbation amplitude drops quickly and even becomes a negative (phase inversion) before the reshock due to the Rayleigh–Taylor (RT) stabilization. After the reshock, the interface experiences a phase inversion again or does not, depending on the reshock time. The growth of the second-order harmonic in the deceleration stage clearly reveals the competition between the RT effect and the nonlinearity. For dual-mode interfaces, the growth of the first mode (wavenumber \(k_1\)) relies heavily on the second mode (wavenumber \(k_2\)) due to the mode coupling effect. Specifically, for cases where \(k_2\) is an even or odd multiple of \(k_1\), the growth of the first mode is inhibited or promoted depending on its initial amplitude sign and the phase difference between two basic waves, while for cases where \(k_2\) is a non-integer multiple of \(k_1\), the second mode has negligible influence on the first mode. Through a systematic study, signs of perturbation amplitudes of the generated \(k_2-k_1\) and \(k_2+k_1\) waves are obtained for all possible dual-mode configurations, which are reasonably predicted by a modified Haan model (Phys Fluids B 3: 2349–2355, 1991). 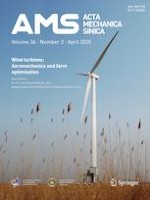 Hybrid algorithms for handling the numerical noise in topology optimization