Groundwater pumping from Kalbha and Fujairah coastal aquifer of the United Arab Emirates (UAE) has increased significantly during the last two decades to meet the agriculture water demands. Due to the lack of natural replenishment from rainfall and the excessive pumping, groundwater levels have declined significantly causing an intrusion of seawater in the coastal aquifer of Wadi Ham. As a result, many pumping wells in the coastal zone have been terminated and a number of farms have been abandoned. In this paper, MODFLOW was used to simulate the groundwater flow and assess the seawater intrusion in the coastal aquifer of Wadi Ham. The model was calibrated against a five-year dataset of historical groundwater levels and validated against another eleven-year dataset. The effects of pumping on groundwater levels and seawater intrusion were investigated. Results showed that reducing the pumping from Khalbha well field will help to reduce the seawater intrusion into the southeastern part of the aquifer. Under the current groundwater pumping rates, the seawater will continue to migrate inland. 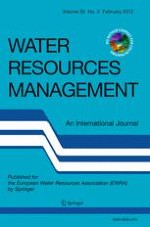 Towards Quantification of the Water Footprint of Paper: A First Estimate of its Consumptive Component

Sustainability of Groundwater Resources in the North-Eastern Region of Bangladesh