Climate Change Impacts Assessment using Statistical Downscaling is observed to be characterized by uncertainties resulting from multiple downscaling methods, which may perform similar during training, but differs in projections when applied to GCM outputs of future scenarios. The common wisdom in statistical downscaling, for selection of downscaling algorithms, is to select the model with the best overall system performance measure for observed period (training and testing). However, this does not guarantee that such selection will work best for any rainfall states, viz., low rainfall, or extreme rainfall. In the present study, for Assam and Meghalaya meteorological subdivision, India, three downscaling methods, Linear Regression (LR), Artificial Neural Network (ANN) and Support Vector Machine (SVM) are used for simulating rainfall with reanalysis data and similar training and testing performances are obtained for observed period. When the developed relationships are applied to GCM output for future (21st century), differences are observed in downscaled projections for extreme rainfalls. ANN shows decrease in extreme rainfall, SVM shows increase in extreme rainfall and LR shows first decrease and then increase in extreme rainfall. Such results motivate further investigation, which reveals that, although, the overall performances of training and testing for all the transfer functions are similar, there are significant differences, when the performance measures are computed separately for low, medium, and high rainfall states. To model such uncertainty resulting from multiple downscaling methods, different transfer functions (LR, ANN and SVM) are used for different rainfall states (viz., low, medium and high), where they perform best. The rainfall states are predicted from large scale climate variables using Classification and Regression Tree (CART). As muti-model averaging (with equal weights or performance based weights) is commonly used in climatic sciences, the resulting output are also compared with the average of multiple downscaling model output. Rainfall is projected for Assam and Meghalaya meteorological subdivision, using this logic, with multiple GCMs. GCM uncertainty, resulting from the use of multiple GCMs, is further modeled using reliability ensemble averaging. The resultant Cumulative Distribution Function (CDF) of projected rainfall shows an increasing trend of rainfall in Assam and Meghalaya meteorological subdivision. 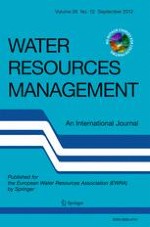 Water and Sediment Quality in Lakes along the Middle and Lower Reaches of the Yangtze River, China