» Get access to the full-text
Important notes
Translated from Izmeritel’naya Tekhnika, No. 12, pp. 42–50, December, 2020.
The influence of the provisions of legal metrology on the formation and functioning of the monetary environment in the market is studied. It is shown that the use of tangible (reference) measures for determining the value of goods and monetary units makes it possible to form a stable monetary system, equal for all market participants. This system can reasonably be attributed to information measuring systems. Systems based on the use of constant tangible measures that determine the value of goods and money have been formed and functioned in international trade for a long time. In the XIX–XX centuries, the monetary system, in which a fixed weight of gold served as the tangible measure of money, was called the “gold standard.” In the 1970s, this system was abandoned without objective reasons. Nowadays, many people believe that the main reason is the uncontrolled issuance of paper money (US dollars). As a result, the tangible measure of money was replaced by a monetary measure. The money of a number of chosen countries turned out to be a measure of the national currencies of other countries. Then money was made a commodity – an object of market trade, the price of which is determined by supply and demand. Thus, the most important principle of metrology, i.e., the invariability (constancy) of the measure of system objects, was violated. The resulting monetary system became unstable. This situation has led to an increase in the number of proposals for a return to the gold standard. The analysis carried out in the paper confirmed the relevance of these proposals. At the present stage of metrology development, it is advisable to explore the possibility of a broader (not only at the expense of precious metals) resource provision of tangible monetary measures, in particular, to consider the possibility of using materials and (or) goods that are in high demand in the international market as monetary measures. 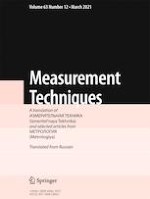 Get 210-2019: State Primary Standard of Units of Specific Adsorption of Gases, Specific Surface Area of Pores, Specific Volume of Pores, Dimension of Pores, Open Porosity, and Coefficient of Gas Permeability of Solid Substances and Fabricated Materials

Metrology of Fluorescent Analysis in Russia and Abroad